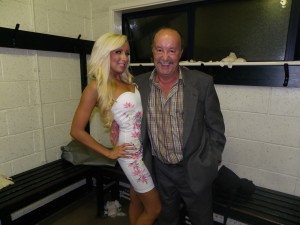 A warm welcome from Sally...

My thanks to Paul Boyce and his team for making me very welcomed on Saturday 16 June 2012 at Neath Sport Centres (Cwrt Herbert) boxing night where he launched an action packed programme. It was a great success and a fantastic night and I was honoured to be accompanied by Welsh boxing legends Jimmy Bromfield and Jeff 'Bulldog' Burns. We also got to meet the lovely Sally Morris from Aberdare.

Paul Boyce Promotions presented five thrilling bouts and every one went the distance making for very exciting viewing but the 'man of the match award' went to Chris Jenkins (Cwmgors) in beating Jason Nesbitt (Birmingham).

Boxing sensation Chris Jenkins (23) is clearly a young boxer to follow. At 17-years old he was the youngest boxer from Wales ever to be selected for the Melbourne 2006 Commonwealth Games. 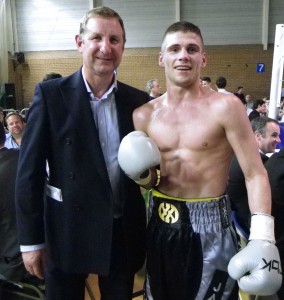 After watching him box twice and train over the last six months he appears the real deal! From the first time we saw him his balance and footwork was most apparent, then add his punching power, speed and incredible fitness he appears to have no weaknesses and his heading to the top! After beating Welshpool’s Russell Pearce at the Oceana Club on 17 February 2012, his first in the paid ranks, he outclassed a resilient Jason Nesbitt (Birmingham). The Racing Horse is keen to follow his career and his trainer Ronnie Morris has given us unlimited access so we will be reporting back on his progress.

Tobias not at his best tonight

Super Middleweight and rated no 10 in the UK, Tobias Webb topped the bill against Darren McKenna (Worcester) and the boxer admitted, despite his points win, he was below the standards he set himself.

Tobias Webb after the fight...

This in no way detracts from his ability or the exciting potential of the boxer and we know this having seen him despatch former WBC Super Middleweight Champion Robin Reid in March of last year. After leaving Frank Warren Promotions it could be Tobias needed this fight and we are certain of a proper response for this next fight, possibly in August. Once again trainers Darren Pullman and Jimmy Bromfield have given us unlimited access to training and thought processes and we will able to report back as to his development. Special thanks to Darren Pullman for all his assistance to date...

There was another fine performance from Leon Lasha Finlay who beat a strong looking Billy Smith in a Welterweight contest. Lasha won the fight by being quicker to the punch and never gave his opponent the chance to unleash.

For those who would like to know a little more about Sally please go to: Sally Morris - Another Welsh Beauty for 2012