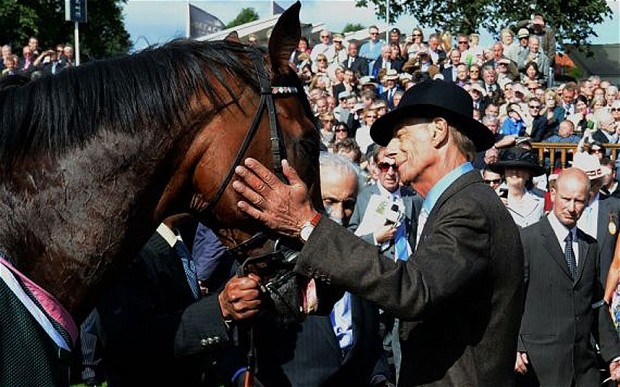 We have a sense that the photo above will become very special and for obvious reasons. The Racing Horse was overjoyed to see Sir Henry Cecil at the Knavesmire to welcome Frankel back into the winner’s enclosure as he wins the Juddmonte International. The race is sponsored by the stud of Frankel's owner, Prince Khalid Abdullah and was clearly not a race that Cecil was willing to miss!

Cecil had a stick for support in the paddock before this race, but he was able to discuss tactics with his three jockeys before legging all three into the saddle. After the race, however, he struggled to say more than a few words, his voice reduced to a whisper as the result of an illness contracted as a side effect of his cancer treatment. He did say: "That was great, wasn't it? It's great for Yorkshire, they are very supportive of racing and they deserve to see him. I feel 20 years better."

How fitting is it that this fantastic man is associated with the greatest horse of all time at this time of his life - The Racing Horse salutes this wonderful man!

Of the horse Richard Fahey told us: "Frankel was fantastic! Never experienced anything like that at a race meeting. Well done to all involved" whilst Michael Bell said: "If Frankel was human he would be Mo and Usain combined."

Angelito appears to have more scope

Angelito 4.00 Bath is our first Pacafi Bet for today. Ed McMahon’s charge appears to have more scope than his rivals and looks to be going the right way. Racing on similar conditions at Leicester last time he was keeping on at the finish after giving the vastly more experienced leader an uncontested lead. He was backed into 5/2 second favourite to win the race that day, so was considered close to Supreme Quest rated 78. He was third at Windsor before that. This is not a strong race and the trainer’s horses are in excellent form. They have three winners from 19 runners at the track for a 16% strike rate.

We had priced Angelito up at 10/11 to 4/5 so claiming value would be a tad mendacious but we do think he will win.

Selfara improving with her racing and five furlongs suits 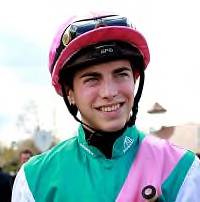 Our second Pacafi Bet is Selfara 7.45 Folkestone and we have taken the even money with Paddy Power (11.50). It might be true that Selfara had things all her own way last time at Nottingham and had the rail to help but she is still hard to oppose today. She had plenty in hand and is clearly improving with racing. She needs to defy a penalty but will go up in the weights once reassessed.

After her very easy Nottingham victory jockey James Doyle told us: "The tongue-tie has definitely helped. Selfara jumped good at Ffos Las last time and had a lot of speed then was treading water in the final furlong, so we dropped her back to five and it´s worked." Robert Charlton has only had two winners from 20 runners at Folkestone but his horses remain in the very best of form. The blinkers and tongue-tie are left on today...

An elementary mistake by The Racing Horse

There is no other way to report it but we had a shocker yesterday! We have reviewed both our bets this morning and we had regrets about selecting We Used To Wait despite her progressive profile appearing to suit the race. Our disappointment is that when we backed her we did so in spite of the jockey booking and we took on trust her ability to handle the faster going. Her sire Mr Greeley had not done anything on fast. The Racing Horse had taken 7/4 fully expecting her to start at 11/8 or 5/4 but the drift or lack of money was ominous. It now looks as though trainer Peter Chapple-Hyam was guessing about whether the going conditions would suit.

The Racing Post said 'We Used To Wait ran a lifeless sort of race and has to questions to answer. She did meet with some interference, but was made to look very slow. This was the quickest ground she´d encountered and it´s hoped that was the cause for this poor showing.'

Every time we lose a point we work harder. We had five qualifiers for our Pacafi Bet today and feel these two have the best chance of winning their respective races. Will be watching the racing at Bath today on television so might dip in and out of the site with updates.

2 Responses to How fitting is it that this fantastic man…