Liam Roberts has the potential to achieve

The star of the card was the 18-year old Liam Roberts from Neath who was fighting in the 82kg division. 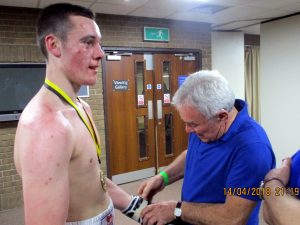 We had watched him training earlier in the week and it was apparent then he possessed the raw material and was listening to his coaches. Giving weight and experience away to his rival he was under torrid pressure in the first round as Nick Cochram got after him encouraged by a huge and vociferous support. But, to Roberts credit he remained calm, kept his feet moving and was clearly taking stock. Kaighin and Bromfield quickly evaluated proceedings instructing their boxer to adapt and quick and the youngster applied himself in intelligent fashion. He was managing the fight when he released a lightening-fast straight right hand found the nose of Cochram and this stopped him in his tracks turning the fight dramatically. Roberts then went for the jugular with a series of fierce body and head shots knocking his opponent to the canvas. To the slowest count I have ever witnessed from a boxing referee the home boxer got to his feet dazed, only to receive another flurry of punches and no official was going to help him this time!

Watching the fight I had forgotten he was just 18-years old. For one so young it was a fine performance but especially in a hostile atmosphere. Being involved in this experienced set-up will give him every chance of success and we will follow his progress - The Racing Horse

After we got home at midnight we analysed the fight with trainer Jim Bromfield and he told me: "Liam's progress over the past year has been excellent and he has the perfect frame to make a boxer. 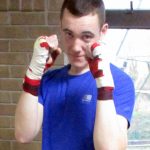 I was pleased with his footwork tonight and something that has just clicked. He is naturally fit and once he fills out and receives the commensurate strength work he will develop, and then it will be up to Liam what he achieves in boxing. He will gain massive confidence from the win. He is good to work with and it is always refreshing to help a young sportsman who is respectful and does not feel the need to swear."

Handmade hanging pendants for your car's rear view mirror or anywhere else of your choosing. From £5 including post and packaging.