JAKFitness & Boxing Gym Moving Forward We were delighted to be invited by JAKFitness & Boxing Gym to travel to Bristol with three Swansea boxers and witness the fine work coming out of the Manselton Gym. The boxers included the experienced amateur Jamie Paton who was a former Light-Welterweight Welsh Finalist, the Rome-born Romanian … Continue reading 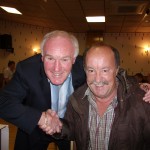 On Friday 7th October 2011 and in the company of the most famous Swansea boxing trainer Jimmy Bromfield I was privileged to attend a book launch written by Jeff Burns titled ‘Swansea Boxers 1916 to 2010.  The book launch was in Swansea at the Railmen’s Club, Wind Street. More than 120 people, including boxers, … Continue reading